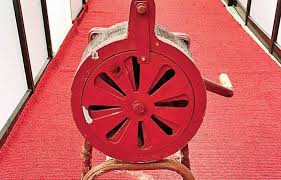 Costa Victoria, a cruise ship from Mumbai en route to Male, docked at Cochin Port at 6.15 a.m. As many as 600 domestic tourists disembarked and 700 will embark for the tour to Male. The tourists getting off in Kochi are expected to visit nearby tourist destinations.

KTM president Baby Mathew Somatheeram and media wing convener Abraham George said that the decision is for recognizing the contributions of tourism towards the Kerala’s economic development and goodwill promotion.